What Is ​Vision Zero? Why is it Needed?


In September 2017, Durham became one of the first cities in North Carolina to officially adopt a Vision Zero program. The Vision Zero resolution approved by the Durham City Council affirmed the City’s commitment to eliminating traffic deaths and serious injuries. It also provided a framework for City departments and community stakeholders to work together to achieve this goal.

According to the Vision Zero Network,  this program is a strategy to eliminate all traffic fatalities and severe injuries, while increasing safe, healthy, and equitable mobility for all. It acknowledges that humans inevitably make mistakes, and calls for roadways to be designed to accommodate these mistakes.

Vision Zero started in Sweden in the 1990s. It has been adopted by many countries around the  world and cities within the United States. North Carolina adopted the Vision Zero program in 2015, and launched NC Vision Zero as a resource for municipalities. Learn more about Vision Zero's origins.

On average, 26 people die in crashes in Durham County each year. As part of its Vision Zero plan, the City of Durham will use a "Five E Approach" – engineering, education, encouragement, enforcement, and evaluation – to eliminate fatalities and serious injuries on our streets.

Slowing motor vehicle traffic is key to achieving the goals of Vision Zero. The City of Durham has created Traffic Calming Guidelines to help residents understand low- versus high-cost traffic calming treatments, as well as the advantages and disadvantages of each treatment. To request traffic calming in your neighborhood, please contact Leslie Tracey 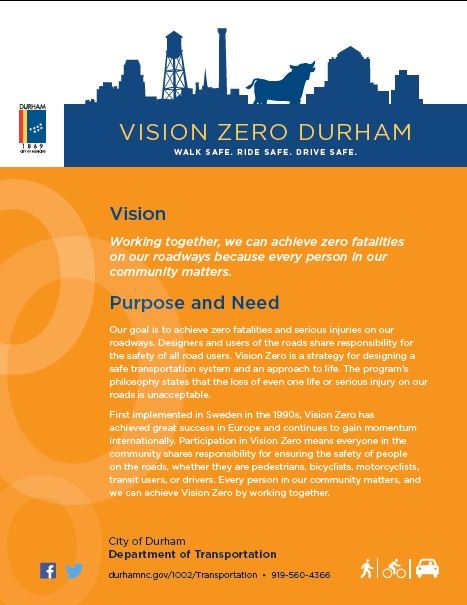 You can support Durham’s Vision Zero planning activities by reporting traffic safety concerns on our Vision Zero Public Comment map. Click on the map below to begin. 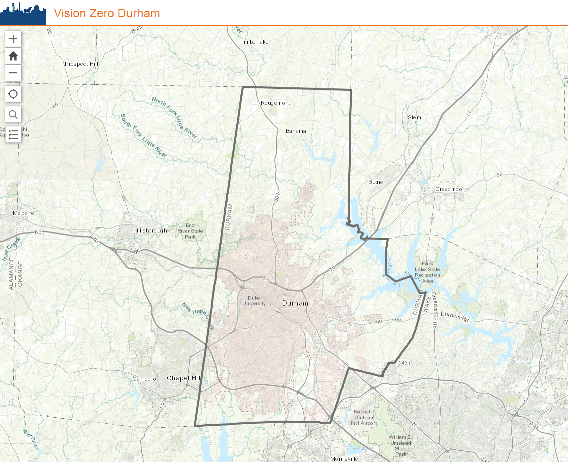