Replacement of existing 18”/15” sewer, with new 36” diameter sewer along the Eno River and Warren Creek, to better serve existing and future development in northern Durham. Initial section is on north edge of river, just up from the dam at West Point Park. Pipeline will cross the river and follow along the north edge of Warren Creek, out to and across Guess Rd., just south of Victory Blvd. Contractor is JF Wilkerson of Morrisville, NC.

New pipe and manholes have all been installed to the projects endpoint, just west of Guess Road, near Victory Boulevard. Several interconnections to small side sewers have also been installed, tested and made live. The Contractor, JF Wilkerson, has been concentrating for the past four to six weeks on grading and cleanup of several thousand feet of the site, starting at the banks of the Eno River, moving out towards Stadium Drive. For the next several weeks, this same work will occur between Guess Rd. and Stadium Dr. The final cleanup will be at the end of Stadium Dr. at the Construction entrance driveway.

In addition to work on the main sewer, final testing and all clean-up have occurred in West Point Park, near the historic Grist Mill. The artifacts have been reset and the gravel roadway has been re-graded. City of Durham anticipates full completion before Memorial Day holiday.

Much work has been accomplished over the past few months. On the north side of Eno River, pipe installation progressed several thousand feet, including a mid-summer open-cut crossing of the river. The contractor, JF Wilkerson, was able to install an inflatable dam, channel all the water to about one-third of the river's width, pump out the area behind the dam, and install 50% of the crossing pipe, leaving the end well marked. After backfilling, the dam was deflated, moved to the other side, and inflated to repeat the process: installing the remaining 50% of pipe and then on to the path beyond the river. Almost 60% of the pipe is installed, including several interconnections with sewers draining nearby neighborhoods.

As work continued on the north side of the river, a second contractor crew, in conjunction with Durham Parks & Recreation, moved in to the West Point on the Eno Park site the first week of November. This work involved clearing trees and brush in the area of the historic mill, connecting to the existing sewer, then installing several hundred feet of new 12” diameter sewer line. Before the sewer was installed, several picnic tables, mill artifacts and a portion of fence had to be taken down. This work is nearly complete. The contractor was able to backfill and clean up the area, allowing visits to the historic Mill just before Christmas. The Parks & Recreation Department is planning to create a more user-friendly display of the artifacts when they get re-set in the early spring. The City appreciates the patience and understanding from citizens and visitors alike.

Over the next two weeks, through July 16, occasional blasting of rock will occur for the new sewer project, just upriver from the West Point Dam on the north side of the river. Out of an abundance of caution, the contractor and project personnel will ask swimmers at and near the dam site to briefly get out of the water prior to, and during, the actual blast. Typically the time will be short—5 to 15 minutes. Once the area is cleared of swimmers, a series of three horn signals will occur, followed by the blast. After making certain the area is safe for swimmers, one more all-clear horn signal will be sounded. The City very much appreciates swimmers understanding and cooperating.

Why is this work needed, what is included, how much will it cost, and how long will it take?
Sewer along the north side of Eno River and Warren Creek, installed in the early 1970’s, has deteriorated and is undersized for current and future development in northern Durham. Sewer from the dam at West Point Park, going west out to Guess Road will all be replaced. Several connections to local sewers will also be made. The approximate cost is $6.0 million and is expected to take about 14 months to complete. A short section of 12” sewer, near the historic West Point Mill, will also be replaced during the winter of 2021.

Will my business or property be impacted during the construction phase of this project?
Disruption to park areas near the dam, on the north side of the river should be expected. This includes several walking trails, including the Mountain-to-Sea trail. No disruption to water or sewer services are expected.

How will I know about detours, changes in traffic patterns, etc.?
The driveway and concrete walk way at the West Point Park Amphitheater entrance will be used for a construction entrance. Use extreme cation while walking and driving in this area! Also some short-duration lane closures will be needed on Guess Rd.

To read an article about this project, visit:
https://www.mckimcreed.com/wp-content/uploads/2021/05/Sanitary-Sewer-Outfall_NC-Currents-Spring-2021.pdf 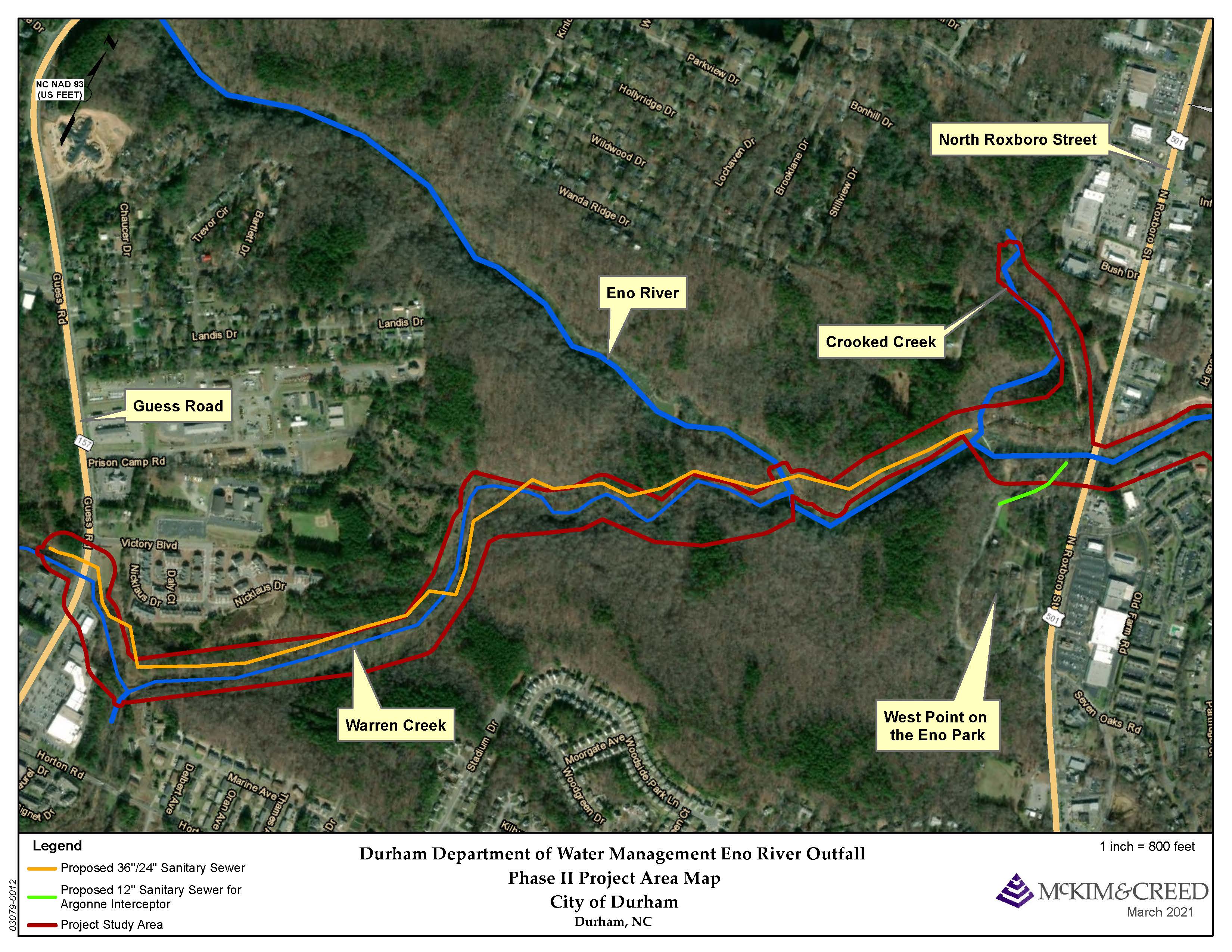 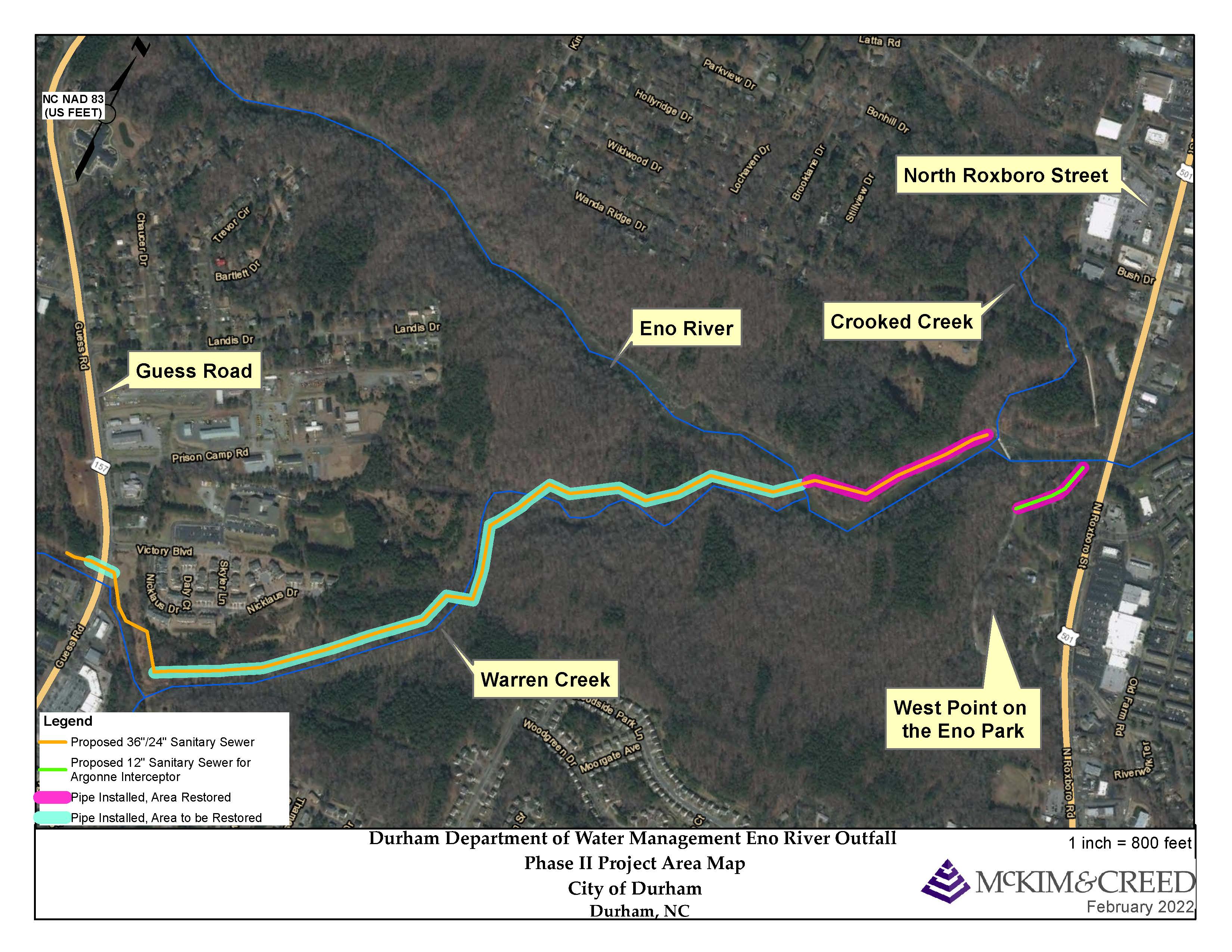